Audrey Azoulay was sworn in as the new Director-General of UNESCO on Monday before the 39th session of the General Conference. Invoking the challenges facing the Organization, she focused on the pertinence of UNESCO’s mandate in her investiture speech.

“Despite many limits and constraints, UNESCO has been able to demonstrate throughout its history a real capacity to bring creative responses to the challenges of the times,” said Ms Azoulay, after the Chairperson of the Organization’s Executive Board, Michael Worbs, the outgoing Director-General of UNESCO, Irina Bokova, and representatives of Member States congratulated her on her appointment.

Ms Azoulay highlighted the challenges posed to the world today by environmental degradation, terrorism, attempts to discredit scientific findings, attacks on cultural diversity, the oppression of women and the massive displacement of populations, saying, “I believe in the need for concerted strategies in the framework of multilateralism to face these challenges today and tomorrow. This is what we achieved collectively with the 2030 Sustainable Development Agenda and the Paris Climate Agreement,” she added. 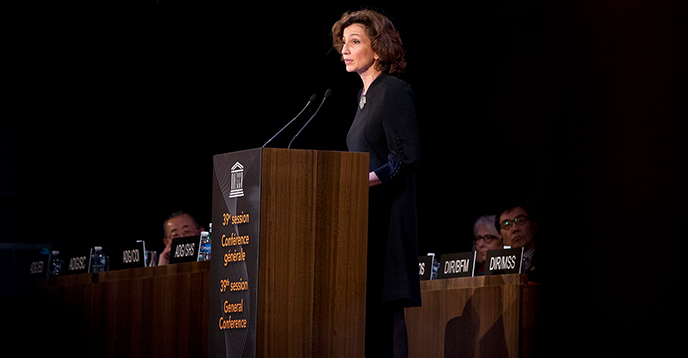 The new Director-General, who was named by the General Conference on 10 November, also spoke of the financial and political difficulties of the Organization: “In this time of crisis, I am convinced that it is more necessary than ever to be committed to UNESCO, to support it, to seek to strengthen and reform it, rather than make it more fragile.”

“We are facing a moment of truth in which we become collectively liable at a time when the need for UNESCO is greater than ever. Together, we must take the right decisions to take it into the 21st century and shape it […] The dream of UNESCO’s founders has yet to come true, and we owe it to the young to maintain that ambition, with them and for them,” she concluded.

Audrey Azoulay is the 11 Director-General of UNESCO and the second woman in that position. She will take office on 15 November.